Newborn cubs follow their mother closely for a year, until the following year in May when the mother and yearling cubs separate during the rutting season. They re-join again later in summer and yearling cubs follow their mother closely again through the end of summer and autumn to the winter nest again. In the third spring after leaving the winter nest, the mother and her cubs paths diverge. All cubs now wander alone but they may meet with each other, and the family members tolerate each other even at close distances. In the end of April or in the beginning of May when snow is melted small bears and mother bears with cubs wake up. Cubs have difficulties to move in soft snow so they must wait for the melting of the snow before they can leave the winter nest. New-born cubs with their mother may come to the hide area in the end of May at the earliest. After waking up they move throughout a small area. They can move in the vicinity but not in the hide area. Cubs are still so small that they don’t understand the commands of their mother to escape or climb up in trees. This is why a mother with cubs trys to stay out of sight.

A mother bear can bring yearling cubs to the hide area in early parts of May. Although cubs are already one year old, male bears are a big threat to them, but they understand this and can escape. Yearling cubs are bigger than new-born cubs, but they are still clearly smaller than their mother.

The best time to photograph cubs is during August and September when newborn cubs and yearling cubs visit the hide area regularly with their mothers. Cubs, as all bears, are omnivores and the biggest part of their diet is meat, with around one third of the diet containing berries. The yearling cubs’ life is now at the point when they are learning the basics of independent life. Their behaviour may seem unsure, dubious and even silly compared to mature fully grown bears.

Yearling cubs have now grown larger and the size difference to the mother is not that obvious anymore. It is possible that sometimes cubs have gained their independence already in their second year of life, At least two different litters have been seen at the hide area every year. Various litters of the same year are seen in the hide area every year at certain times, the previous year’s litters also visit annually. but usually yearling cubs go to the same winter nest with their mother once more. The yearling cubs walk alone at summer and they can also visit the hide area.

Day 1. Timetable and Info of bears, bear photographing and hides

at 7am Return from the hides.

at 3.30pm Info, after that a short walk to the hides (500-900 meters). At the end of September the departure time to the hides can be made earlier according to movement of bears. 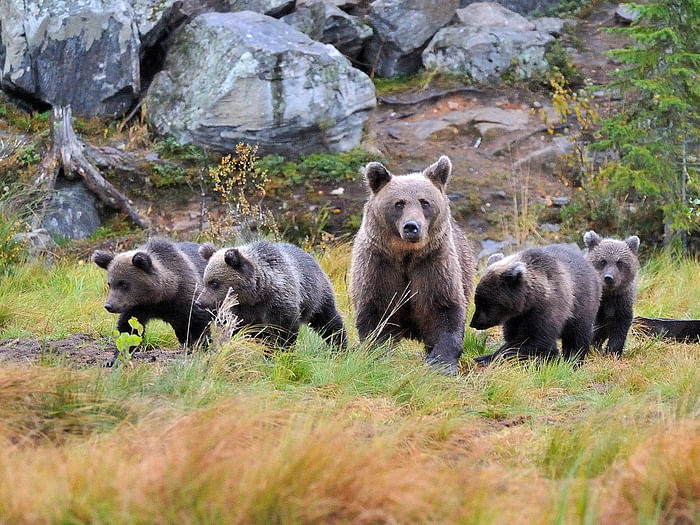 Included in this programme

Bear night includes snacks that contains food, drink and utensils. Snack-packs contain thermos flasks of hot water that can be mixed with tea or coffee. Snacks are packed in backpacks that everyone carries themselves to the hide and back.

Personal snacks and drinks are allowed if you wish, only alcohol is forbidden. When taking your own extra snacks, simple snacks are recommended and should be taken into account that the packaging doesn’t rustle as this may scare bears.

There are sleeping bags in the hides. It is advisable to put the sleeping bag on the chair and sit inside the sleeping bag with socks, this way you will stay warm and you will be able to photograph at the same time. Because the temperature is cooler it is good to bring warm clothing, warm hat, warm gloves, woolen socks and moisture-resistant footwear.

Notice; we cannot guarantee to see bears depend of possibilities is 90-99%.

Please note that is not allowed to smoke or drink alcohol at the hide.

Tips for photographing the litters

- To get the entire litter in the photo, it is good to use a focal length wide enough. Zoom lenses are a good choice.

- When a litter arrives, it is better to have a proper lens attached to the camera body. It is not advisable start to change lenses when a litter has already arrived as photographing time will be wasted and potential noises and the camera positioning may scare the wary mother and her cubs.

- Litters can stay for a long or short time, it is profitable to utilise the entire visit.

- Cubs are quick. At the time of low light, motion blur may occur in the photo, so it is important to maintain shutter speeds fast enough and ISO values high enough. 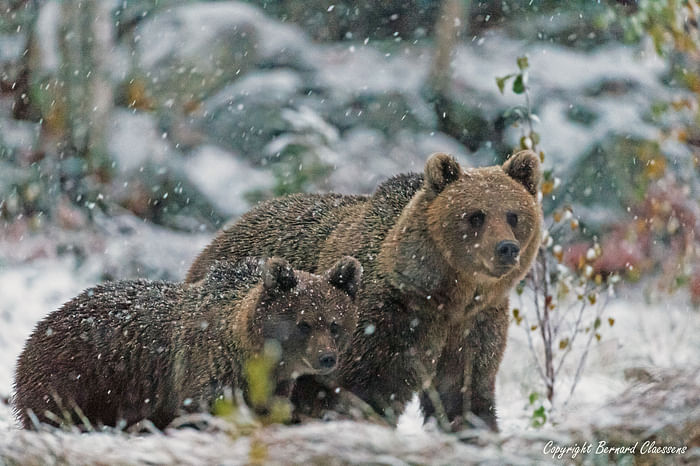 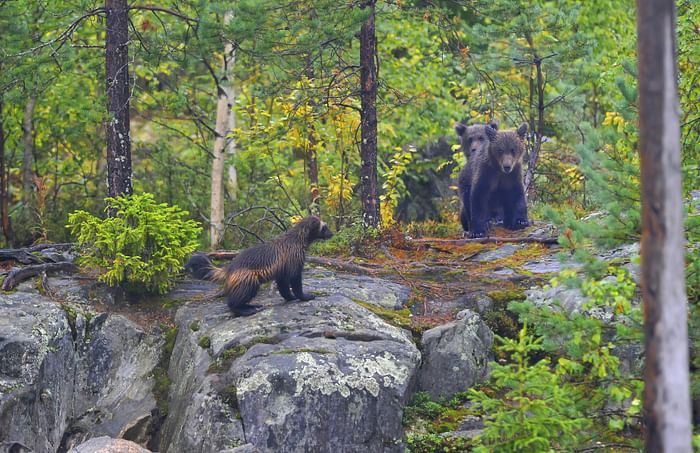 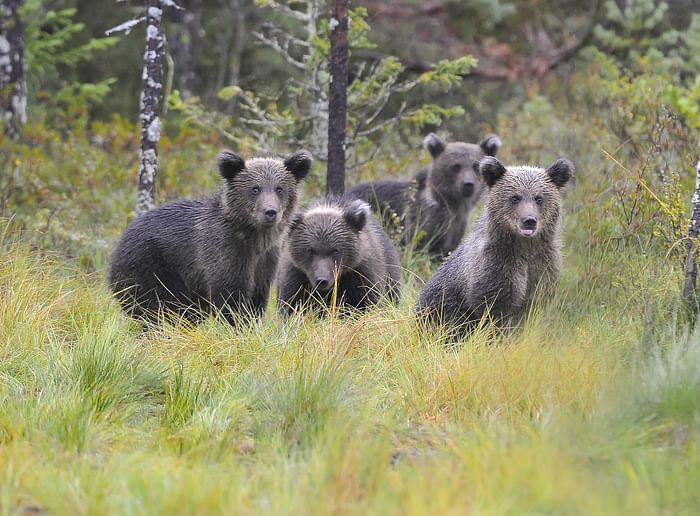 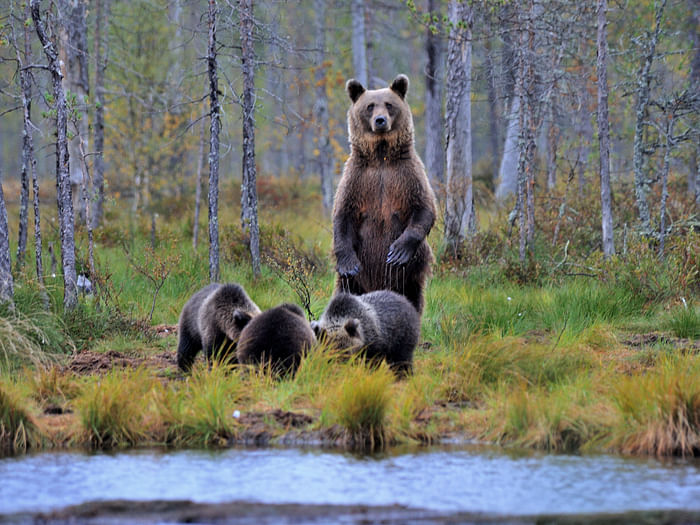 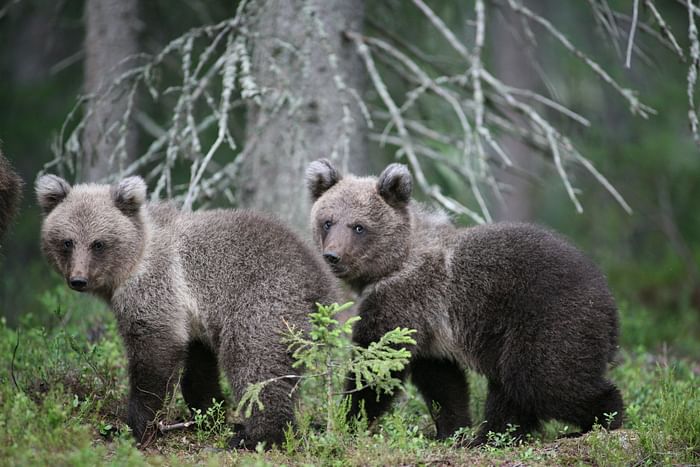 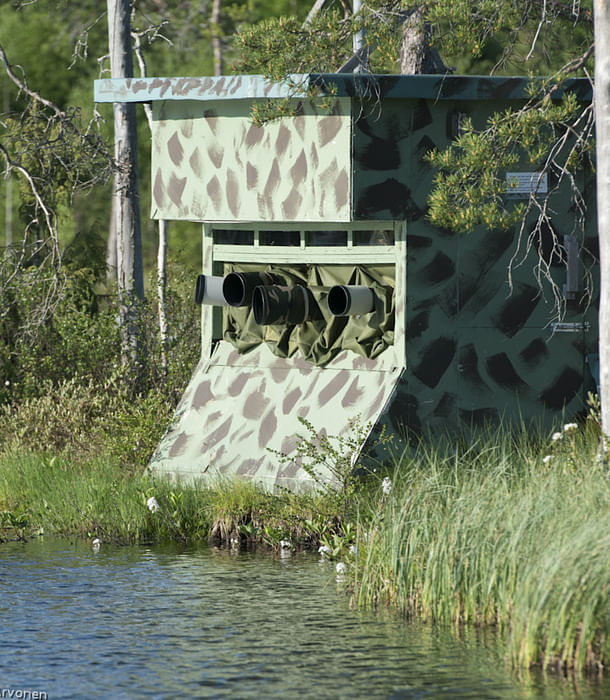