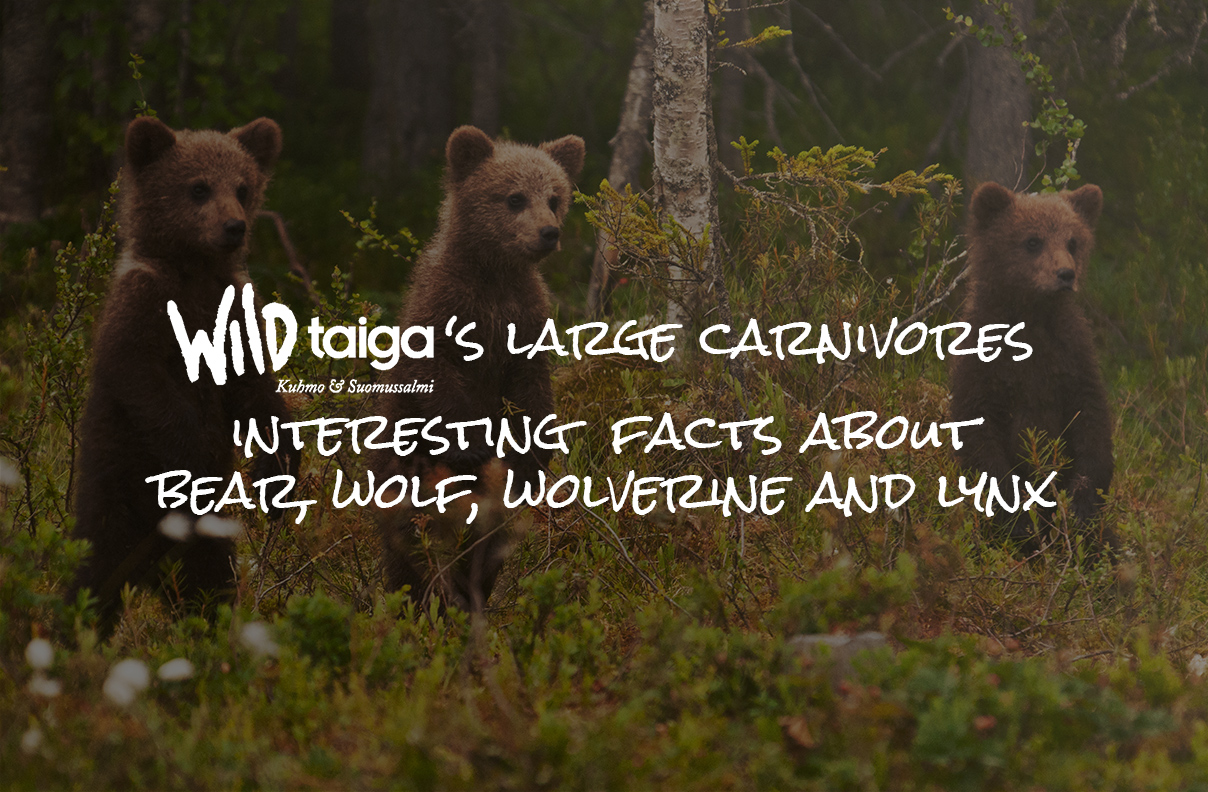 Eastern part of Arctic Lakeland is known for its deep forests, where the big predators have a lot of space for roaming. Their life might seem a bit mysterious so we made an article telling interesting facts about these beautiful animals. 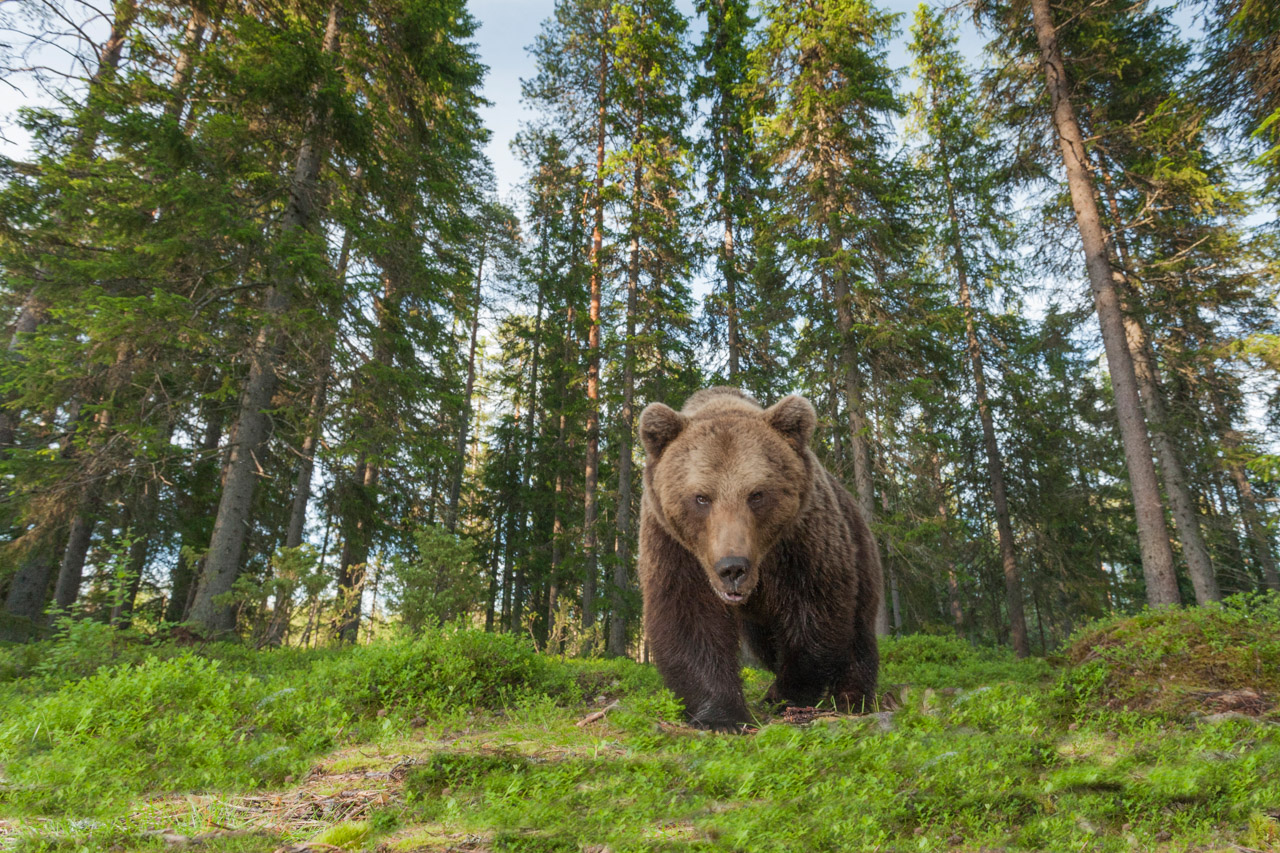 Did you know that Finnish language has over 200 different names for the bear? In the pagan times people were respecting and fearing the bear so much that they didn’t dare to say its name out loud! That’s why they developed different euphemisms.

The bears wake up from their winter hibernation around March to May. The female bears give birth during the hibernation. 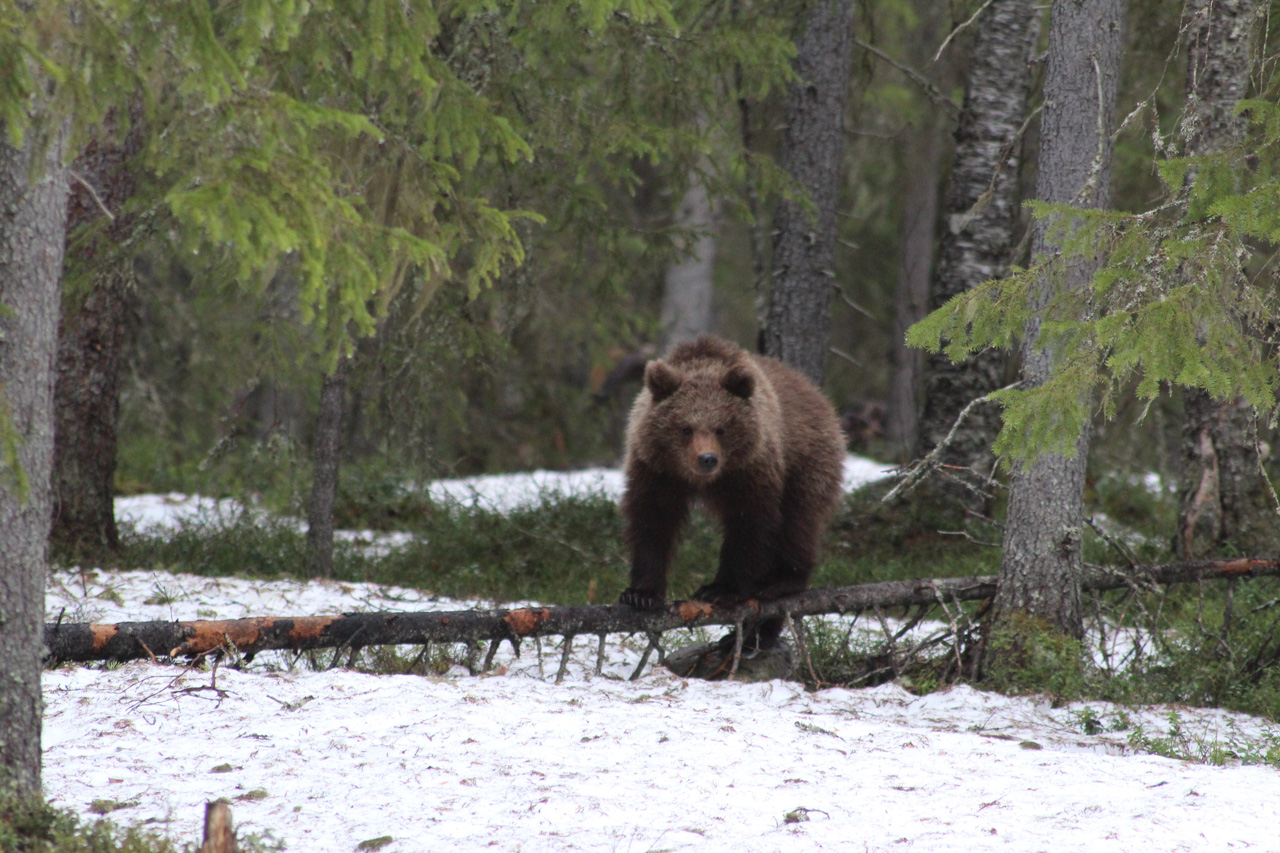 What does the bear eat?

Bears has a lot of diverse in their diet. It might be surprising to hear that 70 % of bears food is something else than meat. They eat for example mooses, does and birds, but also berries, grains and bugs.

When the bear catches its prey, it kills it with strong bite to the neck or back. Sometimes they slam the animal with their paw so it breaks the spine of the victim. If the catch is too big to be eaten at once, the bear hides the carcass by piling dirt and moss on top of it. Sometimes the bear might hide the food into flowing water. 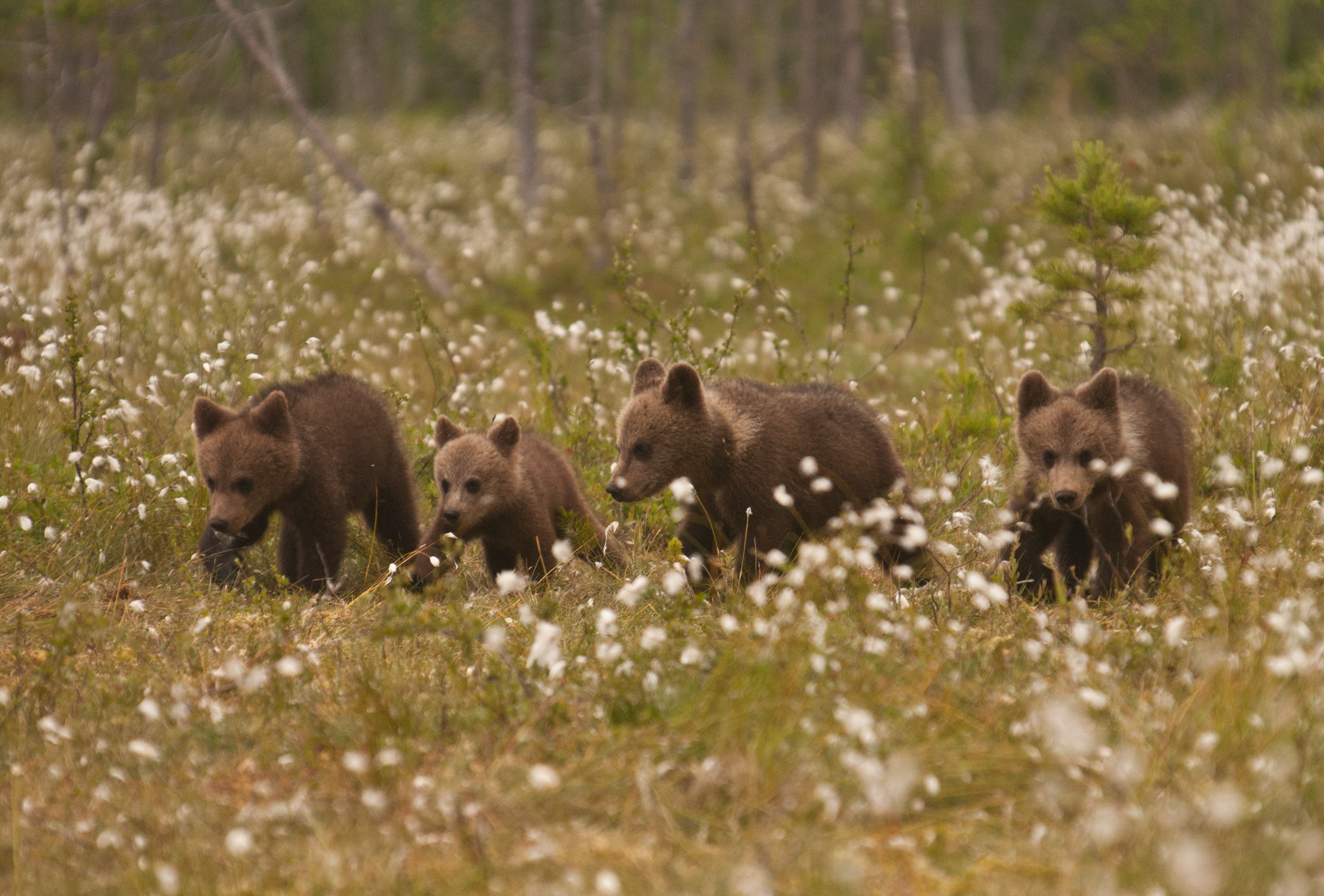 Where can I see bears?

There are bears living everywhere in Finland, except the Åland island. Most of them lives in big forests of eastern Finland and in Lapland. The bears dont care about the human made borders and they are often roaming in between Finland and Russia.

You want to see a bear in its natural habitat? See our bear watching tours! 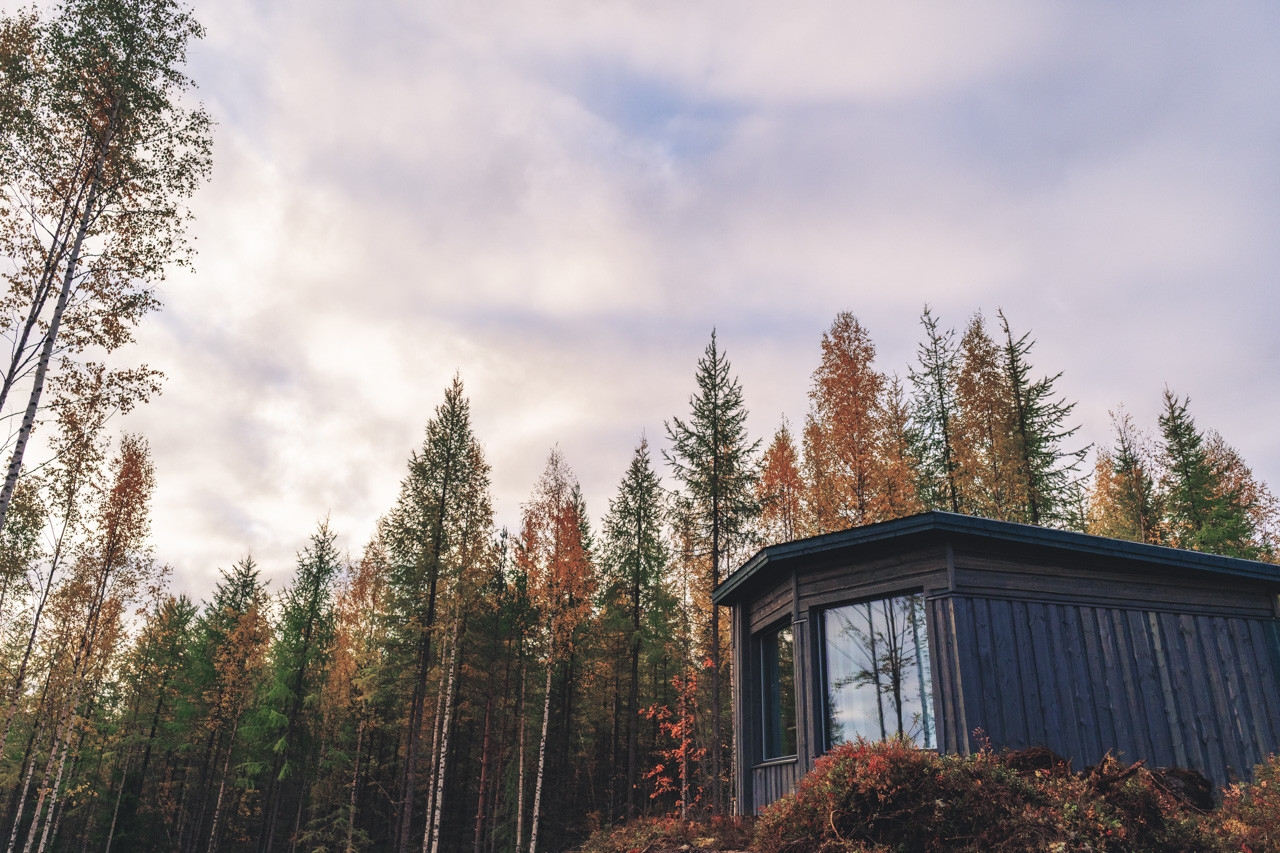 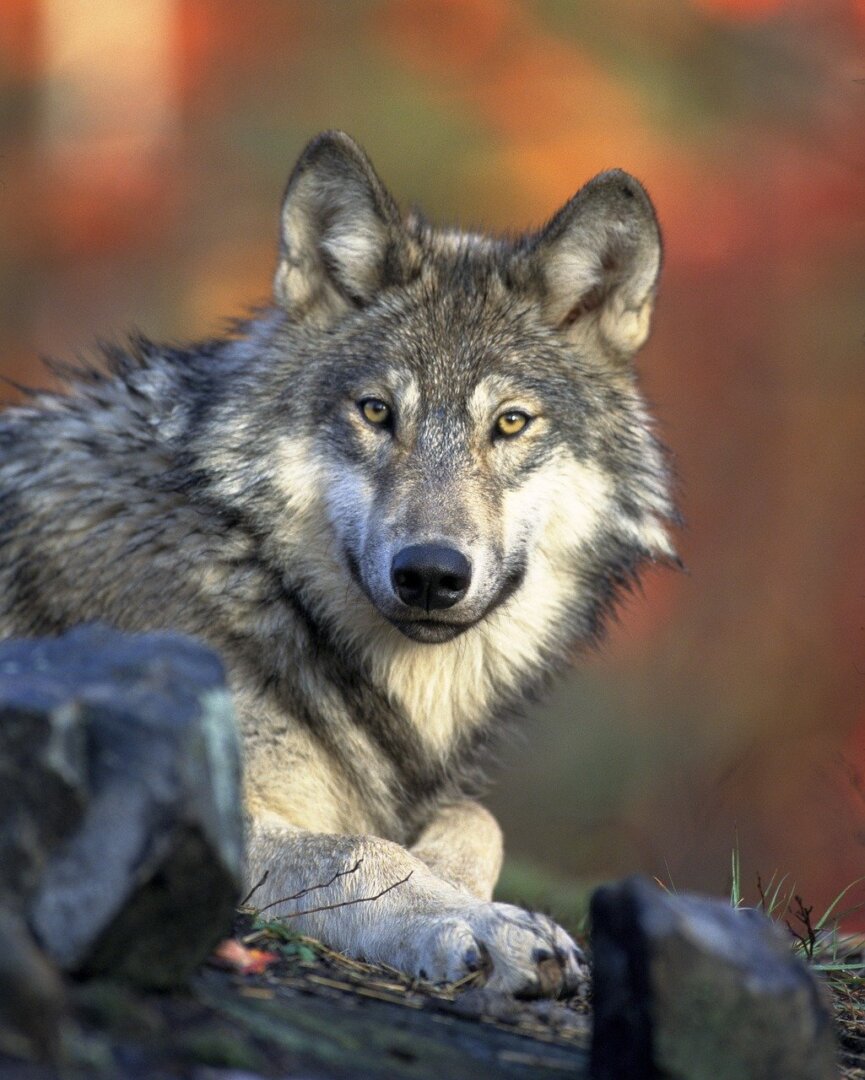 The wolf is a social canine that lives in a pack.

Before the Christianity the wolfs were appreciated and seen as the dog of Tapio, the god of the forest. When Christianity arrived, the wolf turned to be an evil animal. You can see this still in today’s culture; in fairytales wolf is often mean creature. Many wolf-realted sayings in Finnish language describe bad happenings. For example: “Joutua suden suuhun – ending up into wolf’s mouth” means that somebody got into trouble or even died. 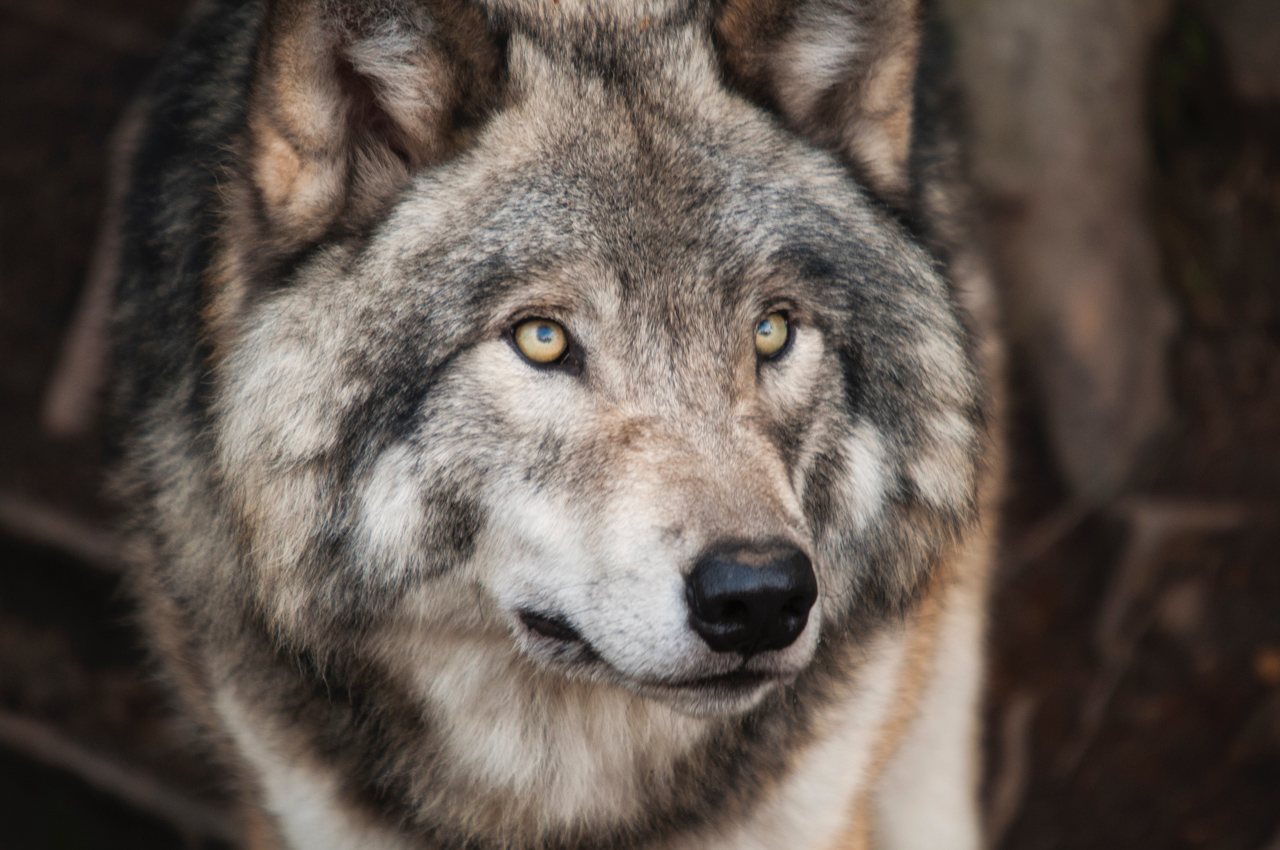 The hierarchy of a wolf pack

The wolfs lives in packs and the hierarchy is very important for them. The alpha male and alpha female are the leaders of the pack. Other members are usually offprings of the leaders, but other kind of packs are met sometimes.

Female wolf gives birth from three to six cubs, but it is possible to get even over ten of them! Usually some of the oldest member of the pack works as a babysitter. At early summer the pack is staying close to the nest but later when the cubs grow and learns to hunt, their movement increases. 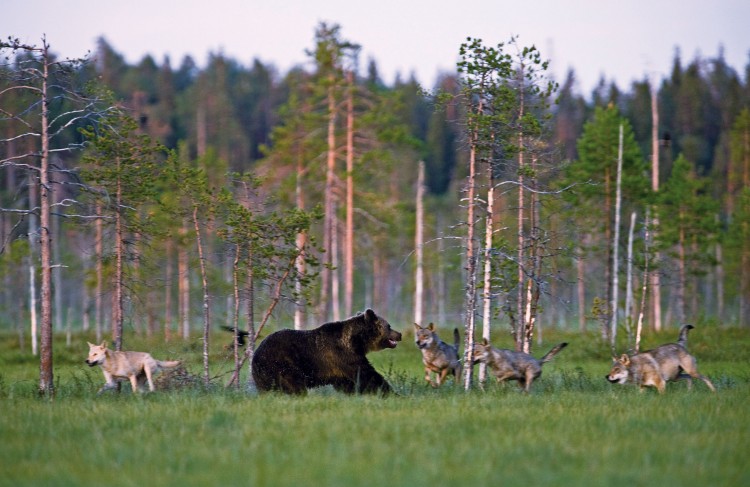 Kuhmo is one of the few locations in the world, where it’s possible to photograph bear and wolf at the same time! Photo: Lassi Rautiainen/Wildlife Safaris Finland

What does a wolf eat?

Wolves are pure carnivores. Early summer when the cubs are small the pack is eating small mammals and birds. At the end of the summer, they start to chase for bigger prey, like deers. Wolves eats also carcasses.

The wolf pack hunts together. They chase the prey until it’s tired and they make a circle around it. If the prey is something big, like a moose, they attack from behind. Attacking such animal from front is dangerous. The alpha couple gets the best pieces of the catch.

Where can I see a wolf?

In Finland most of the volves lives at the eastern side, but lately they have been observed also at west. In northern Lapland are very few wolves. 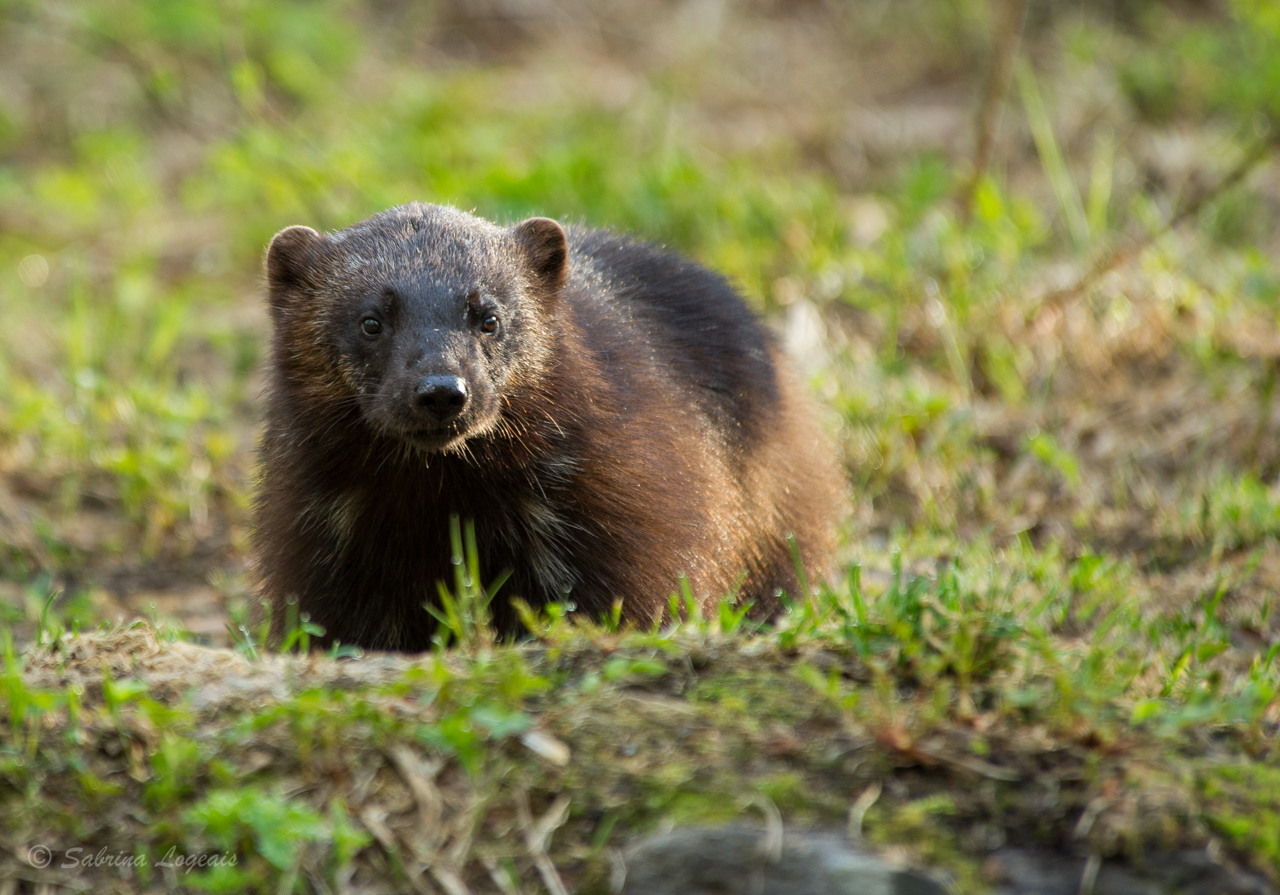 Wolverine is large carnivore that is part of the mustelid family.

In finnish language the wolverine is called “ahma” which can translate into “glutton.” The name comes from the eating habits of wolverine; it eats really fast, swallowing large pieces. If it finds a pack of reindeers, it causes a lot of destruction because it kills more than it can eat, to save the rest for another day.

What does a wolverine eat?

The movement of a wolverine is restless; its in constant movement, looking for something to eat. It puts it’s head into every hole it finds and climbs trees too. Wolverines eats carcasses and hunts for small mammals, birds, foxes and frogs. Wolverine can eat also berries.

The wintertime is the best season for the wolverine to catch bigger prey, because it can run on the snow, when a deer can’t. 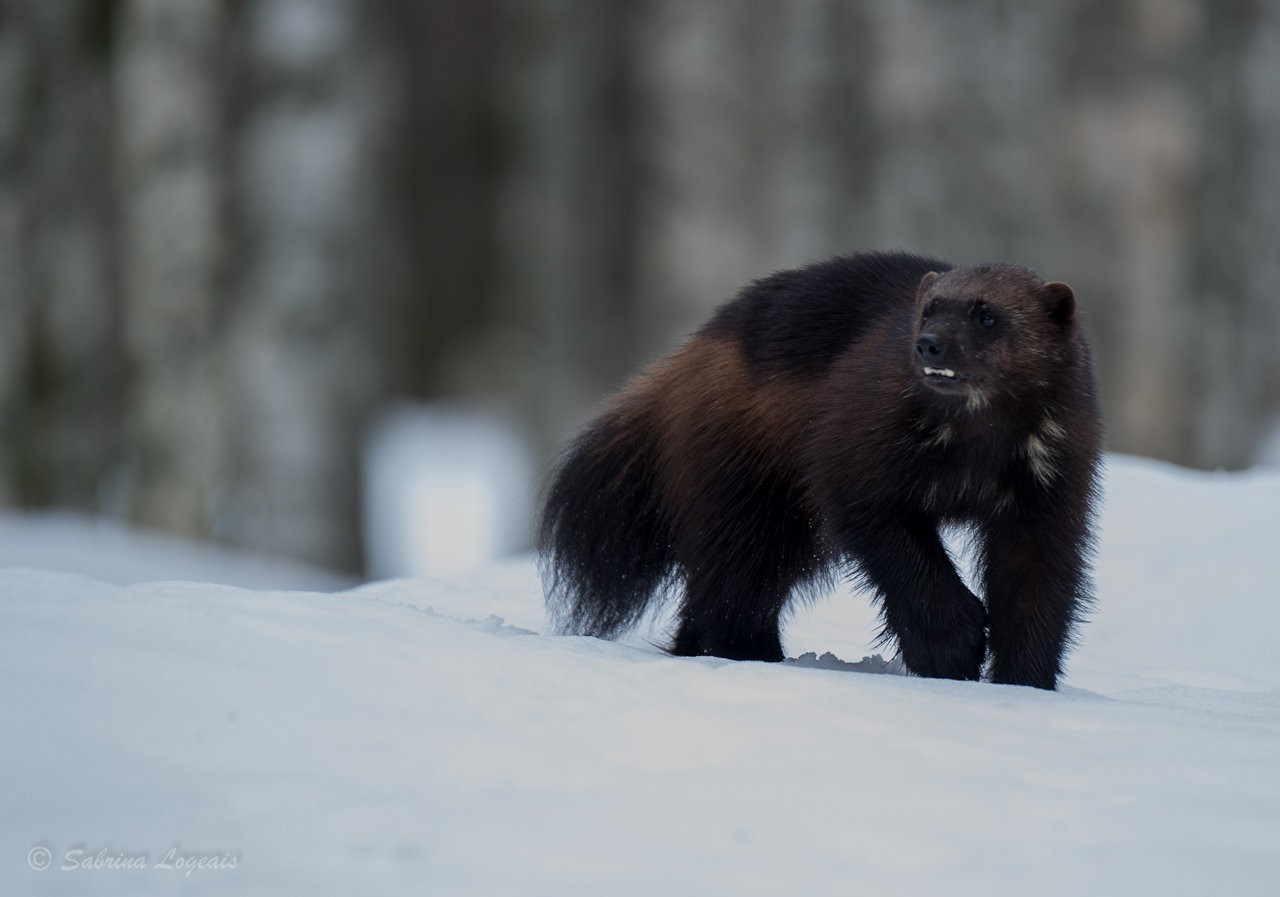 Wolverine can be photographed also in the wintertime. Photo: Sabrina Logeais/Taiga Spirit

Where can I see a wolverine?

Most of the wolverines lives in eastern and northern Finland, but lately they have been met more also in south parts of the country. 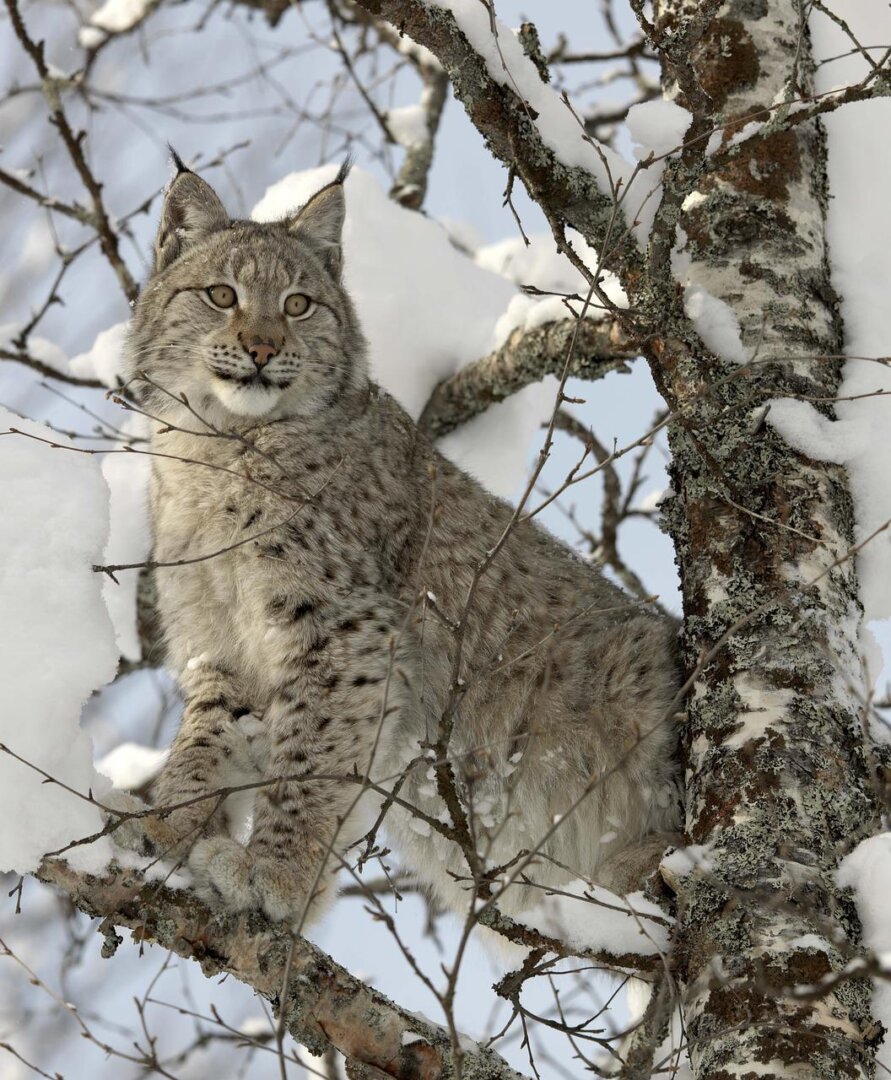 Lynx is the only feline animal that lives wild in Finnish nature. In the old times lynx was really wanted catch for hunters, because of its beautiful fur. The fur of a lynx was really valuable and a hunter got paid really good for selling them.

What kind of sound does the lynx make?

The sounds that the lynxes make are really similar to a house cat. It can meow, purr, growl and hiss.

What does the lynx eat?

Lynx is skillful hunter. It eats small prey like birds and rabbits, but it can also catch bigger animals like reindeers. It might surprise the catch by jumping to it’s back from a tree. Lynx can jump even up to 3 meters height and 6 meters length!

The lynx eats only fresh meat, no carcasses. This is the reason you cannot photograph it from a booth. 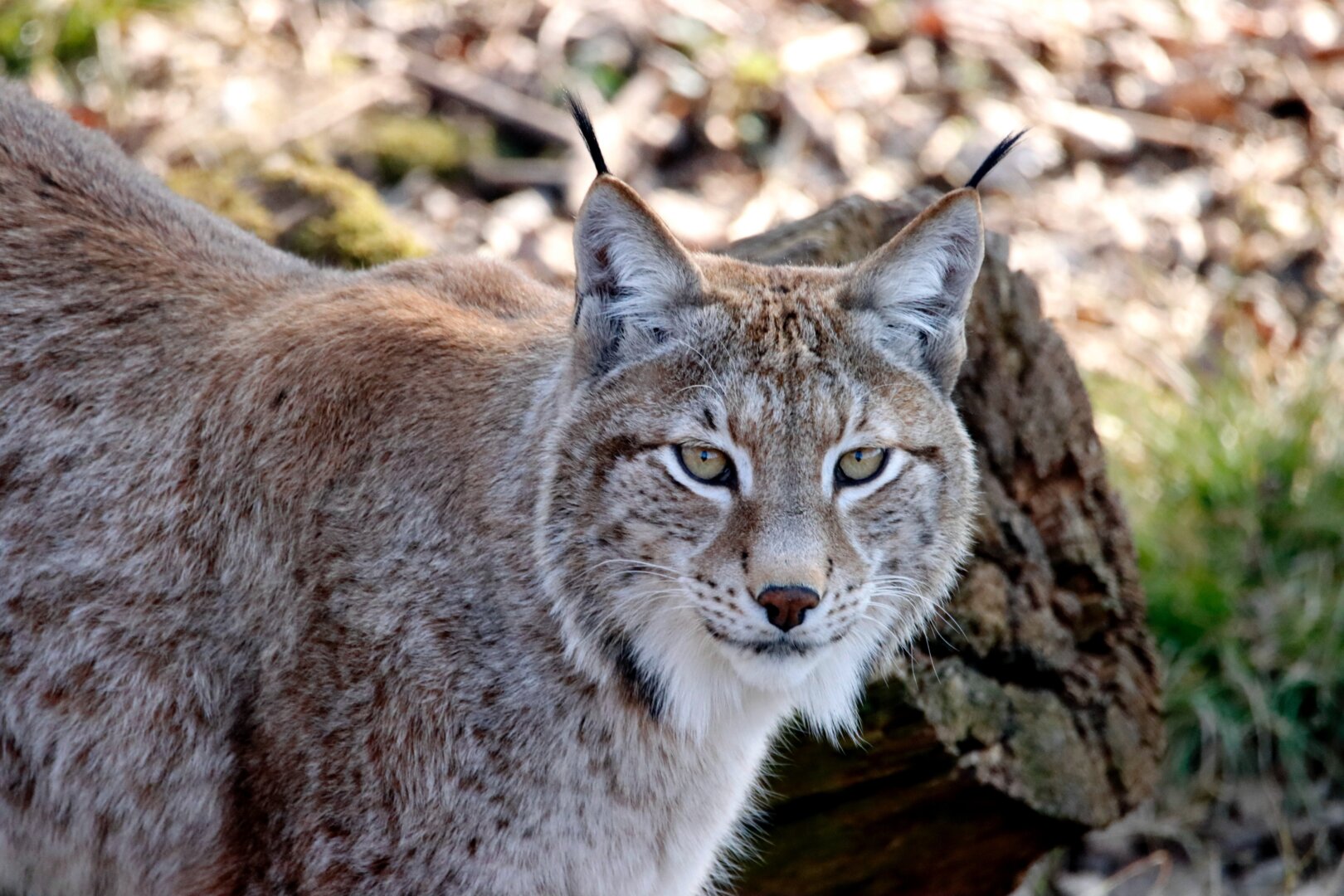 Where can I see a lynx?

Most of the lynx observations in Finland are done in southern and middle parts of the country.

Wild Taiga has large wilderness areas, and it offers great habitat for all the big carnivores. You can watch and photograph bears, wolves and wolverines from a hide. To see a lynx you need to be really lucky.

Do you want to learn more? Visit the Petola Visitor Centre in Kuhmo and you will learn everything about the life of these animals. The exhibition is great for children, too. You can go inside of a ”bear’s nest” to listen to fairytales. You will also learn to recognize the footprints and feces of these animals.

Photographing a predator is amazing experience for both amateur and professional photographers. See all our photography products here.